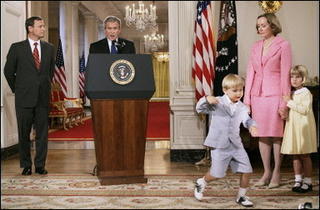 Was adorable little Dancin' Jackie another Karl Rove sly trick? Did the Bush administration contact "Rent-a-Kid" and have them supply a 4-year-old known to be hyperactive? Did the Secret Service tank-up the little rascal with sugar-laced Kool-Aid before allowing him front and center with the President? These are serious questions and will certainly require a trained Special Investigator-Prosecutor to find the turth about this distubing incident at the White House.

The family of newly nominated Judge John Roberts have a cute little son Jack and they dressed him up to meet the President of the United States. However, little Jackie, all costumed in his short pants preppy suit and jazz dance shoes, with cameras flashing and the audience gazing, felt that it was showtime. He went into his routine, twirled and danced, almost causing the President to lose it, until his mother led him off stage. Since little Jackie's name was NOT Chelsea Clinton, speculation immediately began to explain, as nefariously as possible, the antics of the little boy dancer.

Perhaps it was simply a "dance of joy" at seeing his father selected for the highest court in the land. Needless to say, that explanation carries little weight with the Leftists. The Moonbats, in attempts to counteract the kid's charm which they fear may rub off onto his father, Judge John Roberts, have been busy with their Operation Looney Research. They immediately proffered a number of explanations for Dancin' Jack's performance, some of which are unbelievably despicable.

Jon Stewart of the Daily Show thought that little Jack was cute, but probably suffering from ADD: "Jack, of course, is the one who seems to be on the way to losing the case of Family v. Ritalin. ....Actually 4 year old Jack's loveable antics were adored by all...except the Secret Service, who quickly whisked him off to Gitmo."

The Palm Beach Post attempted to attribute the little boy's misbehavior to the clothing he was required to wear, but after contacting authorities on children's fashions, they found no one willing to condemn Jackie's outfit of a blue seersucker jacket and pants, white button-down Oxford shirt, and black-and-white saddle shoes. They ended up blaming his bad manners on his mother. "Jane Roberts dressed John Jr. just right. Now, if she could just work on his manners."

The Daily Kossacks labeled the little boy as a John-John Kennedy wannabe. One Kossack, Mayan, got the ball rolling into the Operation Looney Research: "Did You Catch His Wife? When Roberts thanked his family, he mentioned his son, Jack...Roberts' wife's face fell. It was like a poker tell. I think we should research Jack." Geoptf responded, "He's probably gay. Of course, this is how ridiculous rumors get started, but extreme conservatives seem to have a lot of homosexual children... ."

Did you catch that? The Left is writing about a 4-year-old child!

So having homosexual children is a sign of ... what? The tragedy is that the Gay Hunters seek out these children of conservatives for the purpose of harassing them. The same goes for homosexuals who are employed by conservatives. Those gays are researched and stalked by the loving, inclusive Gay Hunters of the Left. The fact that the Gay Hunters would stoop so low as to cast aspersions upon a 4-year-old boy, and want to "research Jack" because he dances, is truly pathological. John at Powerline wrote "They Were Already Beneath Contempt".

How did the Left become so looney? In this incident it shows that they are far, far outside of the mainstream of society; from Wonkette to Geoptf, they live on the fringes. They are shocked by the normal antics of a child, because they have little experience with children. They are the staunch believers in choosing abortion instead of life. They are the celebrants of alternative lifestyles, which seldom if ever include the raising of children. That is why they are so eager to crucify Little Jackie upon their own self-constructed cross of homosexuality.