Irish To Give Up Fighting 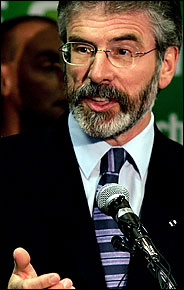 Pack up your troubles in your old kit bag, And smile, smile, smile. There's no more need to worrying - the I.R.A. is finished. With its "armed struggle" against British rule, that is. Oh sure, you say. Well ... this time it may really be true, as I will explain. The New York Times is reporting that the Irish are giving up their fighting ways:

BELFAST, Northern Ireland, July 28 - The Irish Republican Army declared an end to its campaign of violence against Britain that claimed more than 3,500 lives over 36 years, saying there was "an alternative way to achieve" its goal of a United Ireland.

Now don't let this "alternative way" to a United Ireland lull you into believing that those I.R.A. lads have voluntarily come to a change of heart. They haven't. After the London bombings of 7/7, they finally realized that the Jets have moved in and taken over the territory that was once theirs. Not only have the Irish soldiers lost their exclusive right to terrorize, they have been "out-terroristed" by the Jets. Try as they may, they cannot convince any of their I.R.A. mates to go all the way and explode themselves while blowing up their hated British cousins. Killing an enemy during armed warfare is one thing, but according to the religion of the Irish terrorists, to kill one's self is a mortal sin which sends one straight to Hell. Few Irish have heard of the 72 virgins awaiting in heaven for suicide bombers and those who have say they still would not commit a mortal sin unless there were 72 pints awaiting them. Whenever the I.R.A. soldiers do time in British prisons, the mullahs always try to convert them to Islam. All such attempts have been futile as the Paddies will not give up their traditional breakfast of whiskey, bacon and bangers. For the I.R.A. to continue with its terrorist exploits of the past would bring only humiliation to their world-wide reputation as Christendom's own "fearsome stealth bombers". Better to be remembered as the "Retired Fighting Irish" than to be lampooned all the way to Londonderry and home as the "Irish Army of Sissy-Lads".

The statement by the I.R.A. said that its leadership had "formally ordered an end to the armed campaign," as the organization calls its military activities, which are described by supporters as armed struggle and by adversaries as terrorism. The shift followed growing revulsion among its Catholic supporters, both here and in the United States, at the I.R.A.'s involvement in organized crime and, since Sept. 11, at global terrorism. (The New York Times)

The Jets have been nothing but troubles for the I.R.A. beginning with that September 11th mishap in New York City. The Irish-Catholic community got to witness first hand what the British had experienced for decades - the horrors of terrorism. Since that day they've not been quite so generous with their American dollars for I.R.A. bombs. The cash shortage is now so acute that the I.R.A. is sending its troops out to train as bank robbers, bandits and "stick-em-up" thugs, for even an army of terrorists marches on its stomach. Besides, it is much easier to justify murdering the innocent for money, rather than concoct some noble cause such as the "high and mighty" struggle against British oppression.

It is great news for the British people and for the non-fighting Irish. Could it be that capitalism has had such an impact on Ireland, that the Irish would rather be prosperous than united with their Irish brothers? Have they found it to be more rewarding to trade with the British than to bomb them? Or has the I.R.A. discovered that once an army turns to criminal activity, being Protestant or Catholic or even Irish, doesn't seem to matter a lot?