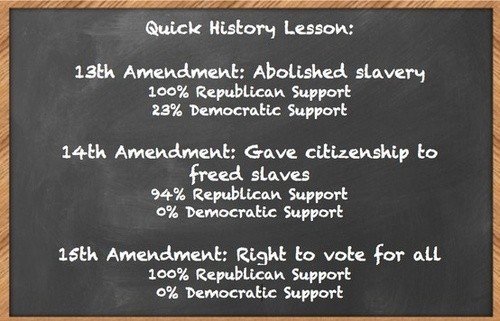 Today, the Los Angeles Times is reporting that the Democrat party "led" the fight for civil rights in America. Above is the True Racist History of the Democratic Party. Next thing the Los Angeles Times will be claiming that Abraham Lincoln was a Democrat. Although it was the Republican Party that freed America's slaves, it is now the Democrat Party that owns 90% of all African Americans, a far higher percentage than ever existed of enslaved African Americans during the slavery era. Go figure. History repeats itself. Blacks, Democrats, and Republicans

This week African Americans called for a rally to commemorate the 50th anniversary of Dr. Martin Luther King Jr.'s "I Have a Dream" speech. Fine. There was an unbelievably large roster of speakers. Great! But ... Where was the only Black US Senator? Where was the only African American Supreme Court justice? Where was the first Black female Secretary of State? Where was the head of the Congress on Racial Equality? Where was Dr. King's Republican niece? Where was gratitude to the Republican Party that stood on the lines for Civil Rights when it was difficult and dangerous to do so? All most of us saw at the Rally was the official "Black Grievance Industry" led by the Reverends, Hollywood stars, sports celebrities, Union leaders, all of whom should be held responsible for pillaging America's largest cities and looting their treasuries, destroying the inner-city education systems and murdering with impunity African American children, both born and unborn. Oh, ... but there was our so-called "First Black" American President, fulfilling his role as the groom on every wedding cake and the beloved deceased at every funeral. There he was proclaiming to the assembled Black Americans that he, Barack Obama, was the "Dream" that Dr. Martin Luther King saw fifty years ago that day. Oh Glory!
Posted by Edna Barney at 10:07 AM No comments:

The Swiss animal rights group Four Paws (Vier Pfoten) would like to ask Oprah, why a so called avowed animal rights spokeswoman wanted to buy a crocodile skin bag.
Posted by Edna Barney at 9:28 PM No comments: