A First at State 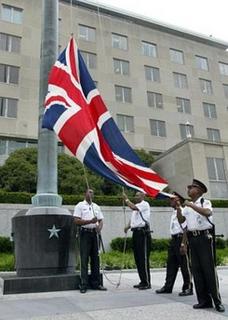 For the first time in the history of the United States Department of State, a foreign flag has been raised. Following in the tradition of Queen Elizabeth, who after the September 11th attacks, ordered her personal guards to play "The Star Spangled Banner" instead of "God Save The Queen", on Thursday, July 7th, 2005, in remembrance of those innocent civilians killed in the London bombings, police officers raise the British Union Jack in front of the State Department in Washington, D.C.

God Save the Queen.