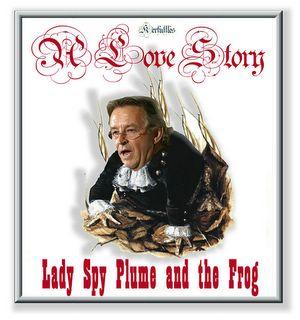 Pete at Ihillary created this great cover for my "Lady Spy Plame Story", a "horrifying tale" of a love affair gone wrong, spun from the quill of Superboy Joey Wilson and based upon the curse of the boy-wizard-who-lived, "may liars come to grief". So why did it all go so wrong for the Plame-Wilsons? John Podhoretz answers at The Corner on National Review Online:

"Did Karl Rove break any laws? No. Did he do anything wrong? No - because saying someone worked for the CIA on WMD is not in any way wrong. Nor was there anything wrong with Cooper learning that Mrs. Joseph Wilson may have arranged a little Nigerian jaunt for her has-been, lame-o hubby -- perhaps because she knew he needed some Dry Look hair spray and could use the Duty Free Discount at Dulles. Or perhaps because she wanted him out of the house because he was so annoying. Or because they could use a little more scratch and he was presumably reimbursed to some extent for his travels. Or perhaps because she's his wife and loves him and wanted to throw him a bone to salve an ego that is roughly the size of the Goodyear Blimp.

"Are the people who are going after Karl Rove's throat with precious little evidence and even less reason now going to hang their heads and blush with shame because they all but convicted a man for a felony he didn't commit in the public prints? Are you kidding?" (Bonnet Ruffles to Dr. Sanity)

Captain's Quarters is bemoaning today that:

"LA Times Still Can't Get Plame Facts Correct: The Los Angeles Times runs an article on the Plame leak today that manages to avoid advancing the story with any evidence and get the existing facts almost entirely incorrect."

The left is welcome to the likes of Joey Wilson. Let them try and follow the twists and turns of not only this story, but his entire life since he has been exalted to "Darling" status by the MSM. As said the great child philosopher, Harry Potter: "Blessed be the giver, Cursed be the thief, May fortune smile upon the true, and liars come to grief."