Lady Spy Plame and the Frog 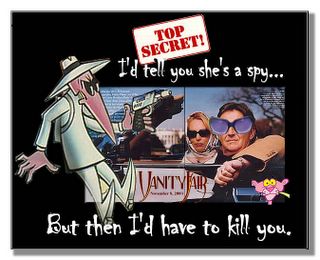 The Frog Marches In On a Dark Horse

Now comes the time for the Main Steam Media, known affectionately as the MSM, to drink the "frog-marching" truth serum like the men that they aren't. For the past two years the MSM has been bringing us the classic Washington nightmare on the big screen televisions of America, this time starring the marching Foggy Frog. The producer of the graphic and frightening "March of the Foggy Frog" has been Washington Superboy Joseph Wilson, who craftily obtained full government funding for his work of fiction, something that not even the wizards at PBS can accomplish. (photo image from IHILLARY)

Riding his own dark horse, Superboy Wilson roams the still swampy Foggy Bottom in search of the mysterious and horrifying Fog Frog. The Fog Frog is an elusive swamp creature; in a single bound it can leap the breadth of the Potomac River, to land on the grassy knolls of Langley, Virginia. Superboy Joseph Wilson must follow in the marching footprints of Foggy Frog, riding his trusty steed, Hellboy, for he is forever eager to flesh out the story of doomed Bushies, wherever they be, and their plottings of a supernatural devastation of the infamous compound on the grassy knoll.

Following the marching Fog Frog, Superboy Wilson has been able to craft a bizarre yet delightful novella about a lady spymaster, Lady Spy Plame, and a town plunged into a walking-dead nightmare, because of the rending of the shroud of secrecy which has been her Langley-given right. A coven of Bushies has come to Washington hoping to unravel the string of weird plots at the claws of the unseen monsters always lurking in the shadows and crevices of the Langley compound. The arrival of a strange yet familiar Fog Frog to the grassy knoll revealed that the Bushies' curse has found them out, but even they know not what has occurred. They ken only that they are about to lose one of their most secret and powerful spies, and they fear most frightfully the catastrophic events about to befall all Americans everywhere in the world, with the fateful fall of the lovely Lady Spy Plame and her devoted consort.

Will the glamourous Vanity Fair cover girl, Lady Spy Plame, find the mysterious secret hidden in the mists of the foggy swamp? Will she kiss the Fog Frog and turn him into the marvelous prince that he is? We await the next installment of this horrifying nightmare tale spun by the delusional mind of Super Boy Joseph Wilson, and funded by The Foundation of the American Taxpayers.