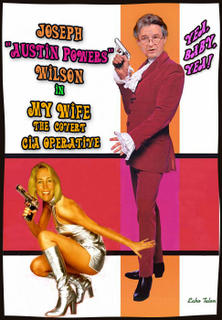 This poster is just more Plame-Wilson insanity brought to you by Free Republic.

What more is there to write? Facts seem not to matter. Karl Rove had a "Top Secret" security clearance, which,

according to news sources, clearly means that he not only had "a need to know" the status of Valerie Plame, but he was, by golly, compelled to know the name, rank and serial number of all undercover agents of the CIA world-wide. That is a fact brought to you by the Main Stream Media (MSM). Captain Ed at Captain's Quarters has more facts today about the MSM's enforced ignorance.

"Joe Wilson victimized the truth and the American public, not the other way around. One would think that media sources who set such store by truth and openness would reflect that in their reporting as well." ~~Captain Ed

BTW, when exactly did the Democrats change their stripes and become the CIA's most ardent defenders? Seems it started about 2003, with their loving embrace of Superboy Joey Wilson. Why, just a week ago, the senior senator from the great state of New York, Charles Schumer, stood with Superboy at a press conference and demanded that Karl Rove's security clearance be suspended. Read Michael Barone for all the details, including a comparison of Joseph Wilson with another greatly discredited blowhard, "Our Titus Oates".

I have just found that the cover that Pete of Ihillary made for my scandal-less story "Lady Spy Plame and the Frog" has been picked up at Free Republic. Go take a look as there are lots of funny 'toons there.