"The 'war' must be fought on British soil" and it is all the fault of Tony Blair. So rants London's "The Independent" today, 17 July 2005: 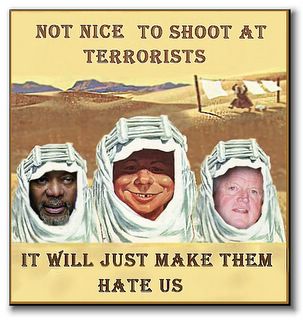 "The Prime Minister could not bring himself to say it directly, but his implication yesterday was clear. He took issue with the idea that Britain's part in the Iraq war was a factor behind the London bombings. This was 'extremist propaganda' that 'exploits the tendency to guilt of the developed world'. This attempt to portray principled opponents of the invasion of Iraq as the dupes of al-Qa'ida was unworthy.

"It would have been more courageous of Tony Blair to have said he accepted that his Iraq policy had prompted passionate opposition among reasonable people and that it had also helped further to enrage people who were unreasonable. Some of these people may have already subscribed to the evil al-Qa'ida ideology, but others may have come to subscribe to it partly because of the war. And Britain's part in the war probably made London more of a target than it would otherwise have been."

As The Independent excoriates the Prime Minister for, in their opinion, the unworthy "attempt to portray principled opponents of the invasion of Iraq as the dupes of al-Qa'ida", the same edition of the same newspaper headlines "Revealed: British bomber had links with al-Qa'ida". Oh the reaping of the "joys of diversity" sown for such a long time at London newspapers:

"Dramatic new evidence linking al-Qa'ida to the London attacks has emerged as a terrorist in US custody identified one of the bombers. The al-Qa'ida aide, who attended a "terror summit" in the tribal areas of Pakistan last year, told investigators in America that he recognised Mohammed Sidique Khan, the 30-year-old who triggered a bomb at Edgware Road station."

Oh Lordy, Lord, what ever we must do, don't shoot the terrorists! They might shoot back. If they shoot first, well, -- just duck, and then blame Tony Blair. As for that stool pidgin "terrorist in US custody" - now that he has squealed, - be nice, and stop any further Star Chamber-like inquisitions and just release him. Then maybe they will hate us all a little bit less. It's worth a try, isn't it? What have we got to lose, anyway?