Posted by Edna Barney at 8:18 AM No comments:

Representative Jenny Horne was frustrated in the debate over removal of the Confederate Flag in South Carolina. Descendants of Confederate soldiers were claiming the flag as their heritage. Horne had heard enough about "Southern Heritage" and she approached the lectern to lecture them about her far more impressive heritage - direct descent from the President of the Confederate States of America, Jefferson Davis. As the modern-day emissary of her self-appropriated ancestor, she demanded removal of his "SYMBOL of HATE off these grounds." Although Southerners are usually reticent about bragging on their famous forebears, Jenny Horne was unabashed.


“I have heard enough about heritage. I have a heritage. I am a lifelong South Carolinian. I am a descendant of Jefferson Davis, okay?"

Yes, it is okay, if it is true. Those who have "heritage" in their family's Confederate service, not only know the names of their ancestors, but the battles they fought, the units they served under, the battle flags they carried, and their lineage from father to son down to present day. Horne told "The Post and Courier" that she is a descendant of Confederate President Jefferson Davis — a claim she said she never researched but was told to her by her grandfather, who was proud of the fact. Regardless, there is nothing that supports her enrobing herself with the respected mantle of a well documented historic American family. Jefferson Davis left few descendants, therefore Representative Horne would have found the genealogical research quite simple, for all four of Davis's grandchildren came of age during the twentieth century. In addition, there is a Davis Family Organization that keeps tract of its descendants.


High birth is disparaged by those who lack it. Those who are boastful of high birth have little else to their credit. --Old Virginia Saying

Heritage in the South is not based upon the rank of one's ancestor in history, it is based upon his honor, duty and service. Jefferson Davis, who was destined to become America's most maligned leader, was in fact a man of great integrity, honor and principle, an American Patriot. It is disrespectful to Jefferson Davis and his true descendants for him to be made into a fake ancestor by those seeking aggrandizement of themselves and furtherance of their political goals. Before serving as President of the Confederate States of America, 1861-1865, Jefferson Davis proved his great dedication to the nation of his birth.


Jefferson Davis deserves more honor for his dedication to a nascent United States of America, than to be have his bloodline and heritage shamelessly expropriated by a petty politician who needs a win and a day or two of media limelight. 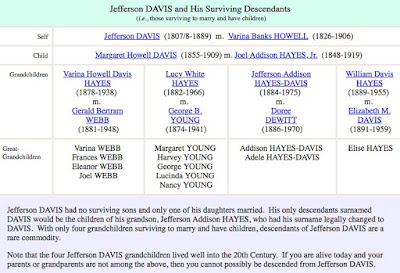 Posted by Edna Barney at 8:09 AM No comments:

Is Jenny Horne a Descendant of Jeff Davis?

As other South Carolina legislators recounted their heritage of the Confederate flag that their ancestors had carried into battle, Representative Jenny Horne who wanted the flag removed from courthouse grounds, trumped them all with her statement of  direct ancestral descent from the President of the Confederate States of America, Jefferson Davis.

“I’m sorry. I have heard enough about heritage,” Horne said during the debate. “I have a heritage. I am a lifelong South Carolinian. I am a descendant of Jefferson Davis, okay? But that does not matter. It’s not about Jenny Horne. It’s about the people of South Carolina who have demanded that this symbol of hate come off the statehouse grounds.”

Although Southerners are usually reticent about bragging on their famous forebears, Representative Horne's statement won the day. But was it true? I have a hunch that South Carolina Representative Jenny Horne is no more a descendant of Jefferson Davis than Senator Elizabeth Warren is of the Cherokee Nation. My hunches are various. I will begin with the fact that to be a descendant of Jefferson Davis one has to trace lineage back to one of four grandchildren of Jefferson Davis who were born 1879 - 1889, and raised and married in Colorado Springs, Colorado. 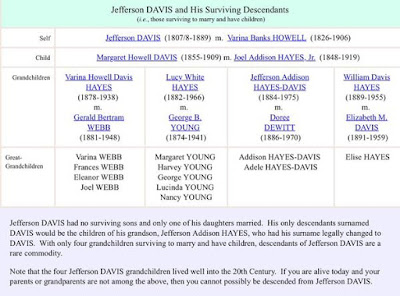 The above chart is from Genealogy of Jefferson Davis, President CSA

President Jefferson Davis had six children, but only one child, a daughter, Margaret who married a man named Hayes had children, four of whom reached adulthood and they all married in Colorado Springs, Colorado. In 1890, the Mississippi Legislature allowed her children to preserve the name of her father, the president of the Confederacy, by using the hyphenation of Hayes-Davis.
South Carolina Representative Jenny Horne's maiden name is Jenny A. Anderson, born in South Carolina 1972, to Danny and Cindy Anderson, indeed, a "life-long South Carolinian" as she described herself. The Jefferson Davis family was from Mississippi where they lived and where their older children were born.

Wikipedia:"Margaret Howell was born February 25, 1855, and was the only child to marry and raise a family. She married Joel Addison Hayes, Jr. (1848–1919), and they had five children. They were married in St. Lazarus Church, nicknamed "The Confederate Officers' Church", in Memphis, Tennessee. In the late 19th century, they moved from Memphis to Colorado Springs, Colorado. She died on July 18, 1909, at the age of 54."

Margaret and Joel Hayes had five children, with four living to adulthood. The four Hayes-Davis children were born 1879 - 1889, and raised and settled in Colorado. All four of Jefferson Davis's grandchildren married in Colorado Springs, Colorado between 1904-1913. So far I have found no connection of their descendants to the Anderson family of South Carolina.

Only those who descend from Varina, Lucy, Jefferson or William Hayes-Davis can claim descent from President Jefferson Davis. It is that easy. Census records are readily available to prove lineage, and if Representative Jenny Horne can tell me how she connects I will verify and report it here.

Is Jenny Horne a Descendant of President Jefferson Davis?

Democrats want to pin the Confederate Flag, KKK, Great Depression, urban decay, and harsh marriage laws on the GOP. Here are the historical truths, which you can prove yourself at Google.
Posted by Edna Barney at 2:20 PM No comments: