No one leaves his heart in San Francisco anymore for fear that it would turn into a chicken's liver. 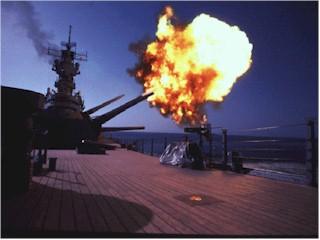 The image here of the Battleship Iowa firing just one of its NINE such 16inch/50 caliber Mark 7 guns, with two rounds of a 2,700 pound armor piercing and a 1,900 pound high capacity shore bombardment projectile, is the reason she is being rejected by the San Franciscans. The first shell is capable of penetrating up to 32 feet of reinforced concrete. The second round carries a high-explosive charge of 154 pounds. The maximum range of the big guns is 25 miles when fired with the normal propelling charge of 660 pounds, with a muzzle velocity of 2,690 feet per second. WOW!!

An American battleship docked at any port is a fearsome, yet awe-inspiring site. It is a floating skyscraper with landscape decorations of "big guns". Unlike an earth-anchored building, a battleship is fortified to resist whatever enemies lob at her, if they dare. However, one must descend down into the cavern of the warship to understand the terror that these ships can visit upon the land, while sitting unseen, miles offshore. Designed by American ingenuity, built by American hands, and manned by America's finest warrior sailors, battleships have kept the armies of the world away from American cities, including the formerly beautiful, coastal San Francisco. Today, these magnificent and mighty warships are in mothballs or have been scrapped. Yet, there was a time, when just the physical appearance of one of these "babes" sitting off-shore, could bring sudden submission without ever a shot being fired.

I have always been one to taut San Francisco as the most beautiful city in America whenever I have been asked my opinion by foreigners. I have not been back to justify my appraisment in decades, but considering comments recently from California's senior senator, I have no desire to return. Diane Feinstein lamented of her hometown: "This isn't the San Francisco that I've known and loved and grew up in and was born in."

The government of the United States has recently gifted the City of San Francisco with the U.S. Navy's decommissioned battleship Iowa, and the city fathers said "SCAT" to the mighty bemedaled warrior. Californians everywhere, here is your opportunity to have your very own battleship floating at your very own front port as a memorial to America. After the rejection by the City on the Bay, Congressman Richard W. Pombo, (R-California), has sponsored legislation authorizing the ship's permanent move to Stockton, which city has already petitioned for the ship. Senator Feinstein has countered with a bill to open bidding to any California city. Californians of sanity - please anchor this historic vessel somewhere deserving so that Americans from all states can come to see her and be proud of California, not ashamed.

Officials in Stockton couldn't be happier. They've offered a dock on the river, a 90,000-square-foot waterfront building and a parking area, and hope to attract at least 125,000 annual visitors. ... San Francisco's rejection of such a storied battleship is a slap in the nation's face, said Douglass Wilhoit, head of Stockton's Chamber of Commerce.

After the Korean war, the Iowa was decommissioned and placed in reserve in a Philadelphia shipyard for three decades. In 1984, it was recalled to duty and, four years later, escorted oil supply ships in the Persian Gulf. In 1989, 47 sailors were killed in an explosion that tore through a gun turret during a training exercise.

The warship, decommissioned by the Navy in 1990, is currently anchored with a mothballed fleet in Suisun Bay, near the mouth of the San Joaquin-Sacramento River Delta. (Newsday.com)

The Original Battleship Iowa of 1898