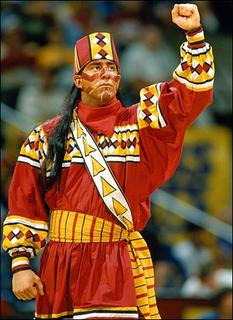 The Seminole tribe of Florida has always been proud of its connection with the Chief Osceola mascot of Florida State University and objected when the National Collegiate Athletic Association (NCAA) banned the nickname and mascot's use. I blogged on this recently in "No Little Indian Boys".

Yesterday, the National Collegiate Athletic Association agreed with the 3,100-member tribe and the Seminole Nation of Oklahoma, which had also endorsed the nickname. The N.C.A.A. removed Florida State from the list of universities banned from using what it called "hostile and abusive" mascots and nicknames during postseason play. "The N.C.A.A. executive committee continues to believe the stereotyping of Native Americans is wrong," Bernard Franklin, the association's senior vice president for governance and membership, said in a statement.

That's the NCAA's official word. Actually, it probably has much to do with the discovery that the war paint, flaming spear and Appaloosa horse that mascot Chief Osceola sports have no connection whatsoever to the history of the Seminole tribe, therefore it would not be an insult to the Seminoles for non-Indians to use them. Do not try anything authentic, as that would in fact be considered a grievous racial slur.

It certainly would not be because 81 percent of Native Americans in a recent "Sports Illustrated" poll agreed that sports teams should NOT stop using Indian nicknames, mascots, characters, and symbols, according to National Review Online. What do they know? Their opinions do not count when do-gooders are on a righteous mission of saving the Indians from themselves.