On the Idaho Trails 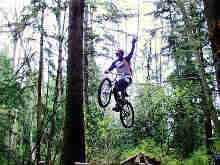 With a Big "HI - Y'all" from POTUS! riding the trails near Lake Cascade State Park in Donnelly, Idaho.

The liberals at the AP cannot quit harping on our president. For the last few weeks they have been accusing him of too much fun down there in Crawford, Texas. Now they are chiding him for using too much fuel for his presidential travels.

"Of All Gas Consumers, Bush May Be Biggest
Getting President Bush from here to there consumes an enormous amount of fuel, whether he's aboard Air Force One, riding in a helicopter or on the ground in a heavily armored limousine. The bill gets steeper every day as the White House is rocked by the same energy prices as regular drivers. Taxpayers still foot the bill."

What the liberals are wishing is that with the rise in oil prices, they can shame the president into going back to bicycling, in the hopes that he will fly over the handlebars again, and they can have weeks of laughter lampooning him. Well, George Bush is too smart to fall for that trick. He has taken up mountain biking and he is now a "pro". No more of these gloats from the Dems and Aljazeera as this headline exemplifies last month: Bush Falls Off Bike Again.

"The president rode 16 miles, sampling many of the singletrack trails that have earned Tamarack a reputation for world-class mountain biking. Idaho Gov. Dirk Kempthorne joined the president for a ride that included dirt roads, singletrack, a tour of the golf course and a visit to the mountain bike challenge park. "

President George Bush is rested and tanned and ready to hit the dirt road back to Washington, this time traveling on a "gas-less" mountain bike. We have obtained these photos via an Internet spymeister to prove Bush's expertise. It seems that the left hand of the AP knoweth not what the right hand writeth. A year ago the website "Slapnose" quoted another AP report about the president's mountain biking skills, describing "George Bush: Tough as Nails".

"Bush has only been riding the knobby-tired mountain bikes since February, yet he takes on dangerous sections that would give veterans pause. He keeps a cramp-inducing pace on long uphill sections, pouring it on to reach each peak, backing off a little to recover and then attacking the next hill.

"He pants hard, emitting low 'hrrr, hrrr, hrrr' grunts with each stroke of the pedals, his shoulders bobbing up and down. Bush's new bike is one of the best in the business: a Trek Fuel 98 made of high-tech carbon fiber. The frame is adorned with top-shelf components that Bush professes to know little about, including a motorcycle-style front and rear suspension that soaks up big bumps." 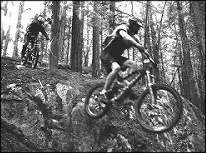 The president's Secret Service contingent has been having a difficult time keeping up with him, lagging behind POTUS, even while taking the easy "downhill" trails. The president has commandeered some night vision goggles from his private army

and has been using them in Idaho to practice for planned midnight jaunts when he returns to town. No - not à la Bill Clinton, mind you. The President just feels that his Washington outings will be more peaceful at night when all of the MSM reporters are holed up in pubs and bars. 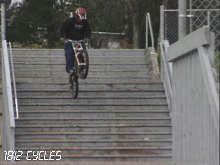 In addition to practicing night riding, President Bush is also taking on steps - as in the "Capitol Steps". Yes, come January, instead of wasting taxpayer dollars on fuel to drive a limo over to address the U.S. Congress with that "State of the Union" thingy, President George Bush plans to be the first president ever to take the "steps" by mountain bike. He has been practicing real hard on this feat as you can see here. 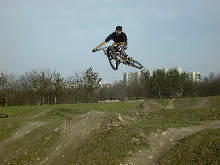 The most recent image found is one of the president while he was showing off his cycling skills in Washington recently to his biking buddy, Lance Armstrong. With all of their biking paraphenalia, few reporters recognized either of them. Fortunately Lance, who was quite impressed, snapped this amazing picture of the president doing wheelies on the Washington mall. What a Guy - Our George! Eat your heart out Tour de France, Aljazerra and Bush-haters everywhere!

PS: Yes - it's satire, except for the quotes about Liberals, which, although hard to believe, are really true. Linked at Outside the Beltway, Mudville Gazette's 'Open Post', Wizbang's Carnival of Trackbacks and basil's blog Supper.