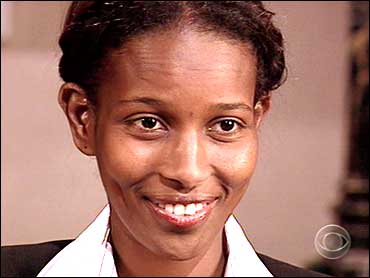 Can a young Muslim girl in Africa, who reads Nancy Drew mysteries, grow up to live the American Dream in Holland?

As a young woman of twenty-two, Ayaan Hirsi Ali fled to Holland seeking asylum because she would not submit to her family and the Muslim religion. The Netherlands accepted her, as it has done for so many others fleeing persecution throughout the centuries, from the Jews to the French Huguenots to the Separatists, the beloved Pilgrims. She became a star immigrant, gaining fluency in multiple languages, rising from menial jobs in factories and hotels to attend university, and winning a seat in parliament.

Ayaan Hirsi Ali became a writer and produced the controversial film "Submission," which illuminated the blind spots in Holland's tolerant democracy, such as spousal abuse of Muslim women and the "honor killings" of those who stray from the faith. Hirsi Ali's film offended Muslims worldwide, especially those living in the Netherlands, where it first appeared on television in the summer of 2004. Shortly thereafter, her partner in the film's creation, the popular and outspoken Theo Van Gogh, was brutally murdered in broad daylight.

Almost overnight, the writings of Ayaan Hirsi Ali changed her adopted homeland forever. She now lives in hiding with round-the-clock security. Some high government officials, for safety concerns, spend their nights sleeping in prisons. There has been a sense of lost innocence among the Dutch, as the most tolerant of all nations was transformed, and long-simmering resentments and feelings of anger against the country’s Muslim minority erupted. Holland's centuries-old tradition of religious and social tolerance and policies of openness to the world are now ended, along with the easygoing Dutch immigration laws. These extreme measures were once considered unthinkable in Holland. It's reputation as a welcoming country is now history. In the Holland which had been nicknamed the world capital of free speech there is a new anxiety, as many fear speaking out or making art or movies about certain subjects. The citizens are even demanding a Dutch Patriot Act.

These history changing events came about because of the written word. Hirsi Ali began rejecting her religion at an early age: "From the time I started reading novels of Nancy Drew and Hardy Boys, I wanted to be like Nancy Drew." As an adult in a free society Hirsi Ali began writing her own words and Holland will never be the same again. There is video of her interview at CBS 60 Minutes | Slaughter And 'Submission' |.

The Muslims Shall Inherit the Netherlands

No Mercy and No Respect

Leaving the Sinking Netherlands
Posted by Edna Barney at 12:34 PM