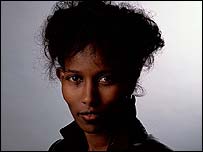 "Somalia is made up of a population which is 100% Muslim. The radical leanings of a huge number of the population is unfortunately growing, and the position of the Somali woman has never been worse than it is now. If I were to say the things that I say now in the Dutch Parliament in Somalia, I would be killed." ~~Ayaan Hirsi Ali, one year before Muslim radicals in Holland have threatened her life

Living with Islam ~ The new Dutch model? from "The Economist"
Posted by Edna Barney at 8:47 AM