It seems that Liberals are the same the world over. 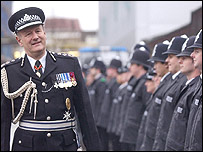 Former Metropolitan Police Commissioner Sir John Stevens says up to 200 Al-Qaeda "terrorists" are operating in UK and the threat of attacks is real.

He has backed proposed anti-terror laws, saying critics were naive about the "brutal" threat posed by fanatics.

Sir John, writing in the News of the World, said militants trained by Osama bin Laden "fester" across the country.

But the Liberal Democrats accused him of sending "mixed messages" adding to an already "complicated situation".