Get Government Out of Our Bedrooms 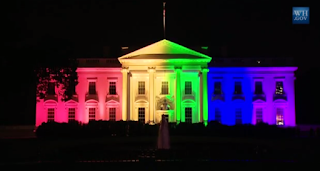 President Barack Obama Tweeted his Same Sex Marriage Victory as #LoveWins,
with the People's House bathed in Gay Pride Colors, 26 June 2015.
There is a way around this overbearing legislating of the Supreme Court Nine. Individual States should get out of the marriage business. "Get the government out of our bedrooms" as some used to rail. Lawyers can draw up marital contracts; DNA tests can prove paternity; women of today have jobs and can support themselves; and when all that fails there is government largess (the Welfare State) for all. For those who believe in the sanctity of marriage and marriage as a religious sacrament, there is their church that can marry them according to that church's rites. Elizabeth Scalia wrote it this way: 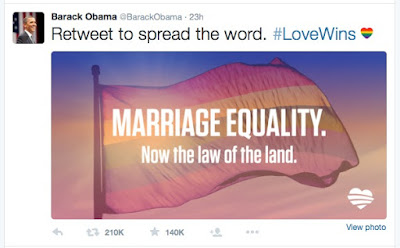