‪#‎LoveWins‬ Rainbows and turns its back on Evil. 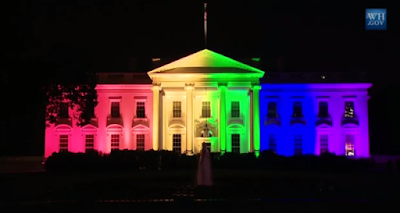 On Friday, in Sousse, Tunisia, more than fifty European sunbathers were gunned down by an Islamist; in France an American factory was bombed with a worker’s head mounted on a pike; in Kuwait, a suicide bomber left 27 worshippers murdered in a Shiite mosque. But in America, there was no mourning those victims, only celebration for a newly found Constitutional human right - Dignity. Inside offices, schools, churches, synagogues, homes, Americans were tacking up Rainbows. Facebook, Twitter were awash with Rainbows. By Friday night, the White House was aglow in LGBT Rainbow colors. Justice Scalia's photograph was morphed into the Devil because it is so much easier to pretend, and to photoshop Rainbows than to stand face to face with real evil.
Posted by Edna Barney at 1:59 PM