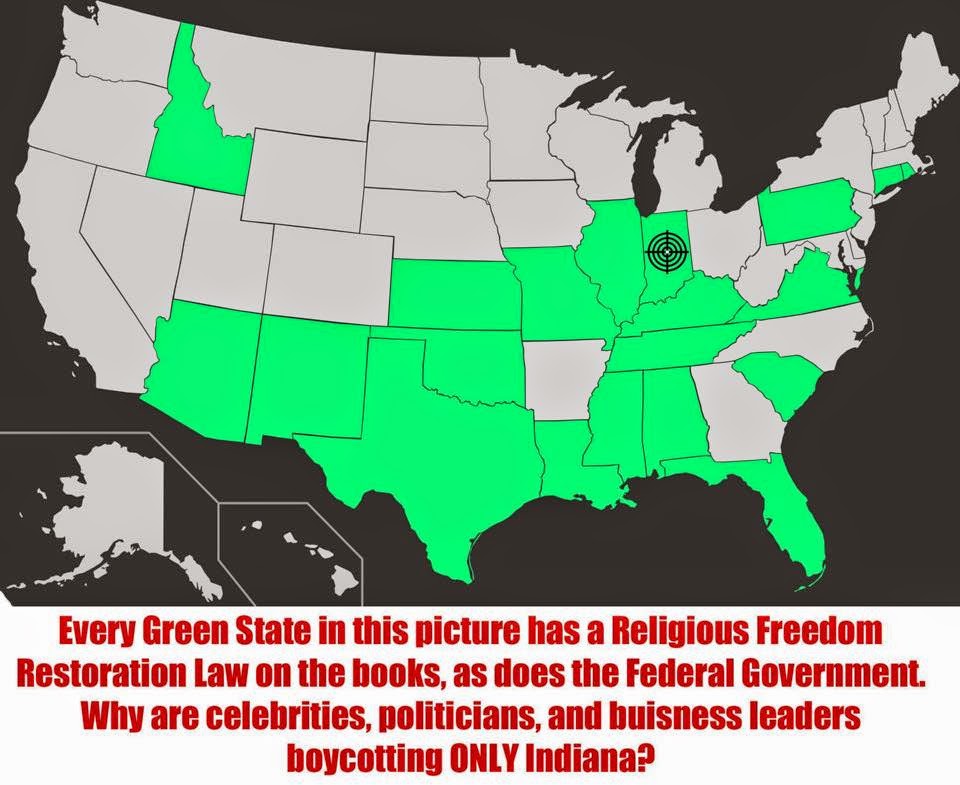 You can tell by the uproar over the recent Religious Freedom Restoration Act in Indiana that the Homosexual Rights Lobby is not at all about Homosexual Rights. They now have more Homosexual Rights than they know what to do with. What the Gay Mob is about is the destruction of the Christian Church in America. Christians are no longer permitted to tolerate, live and let live, or look the other way, but as said in the Florist's case: "the government will bring about your personal and professional ruin if you don't help CELEBRATE same-sex marriages." It is about removing protection for Freedom of Conscience from the US Constitution. The Gay Mob is about amending the First Amendment by eliminating: "Congress shall make no law respecting an establishment of religion, or prohibiting the free exercise thereof."

President Bill Clinton's remarks at the signing of the RELIGIOUS FREEDOM RESTORATION ACT on the White House South Lawn, November 16, 1993:


"The free exercise of religion has been called the first freedom, that which originally sparked the development of the full range of the Bill of Rights. Our Founders cared a lot about religion. And one of the reasons they worked so hard to get the First Amendment into the Bill of Rights at the head of the class is that they well understood what could happen to this country, how both religion and government could be perverted if there were not some space created and some protection provided. They knew that religion helps to give our people a character without which a democracy cannot survive. They knew that there needed to be a space of freedom between government and people of faith that otherwise government might usurp."

‘Government should be held to a very high level of proof before it interferes with someone’s free exercise of religion.’


First Amendment to the United States Constitution  "Congress shall make no law respecting an establishment of religion, or prohibiting the free exercise thereof; or abridging the freedom of speech, or of the press; or the right of the people peaceably to assemble, and to petition the Government for a redress of grievances."