Obama of the Pursed Lips 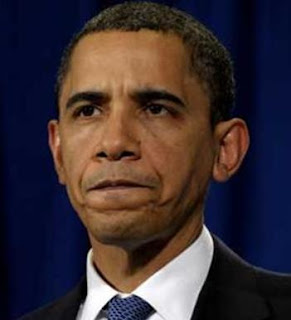 "His Chin Firm, His Neck Taut," employing "the Cigarette Breath"
"Today, as Barack Obama nears his 50th birthday, The New York Times featured quotes from scientists and plastic surgeons describing Barack Obama's wondrous physique. The newspaper article was labeled as "News Analysis" (wink - wink), but it read more like a bad romance novel, marveling at the physical attractiveness of our Boy President as he approaches the half-century mark. "His brow is mostly smooth, his chin firm, his neck taut," lusted The New York Times writer Denise Grady.  The New York Times Gushes Over Obama 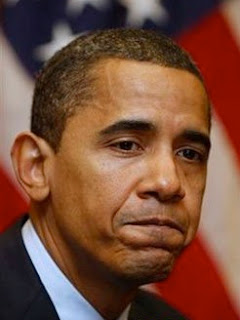 However, the sycophantic New York Times newspaper neglects to tell its readers of Mr. Obama's breathing regimen and why so many photographs show the President with tightly pursed lips, as shown here. "Pursed lip breathing is done to reduce anxiety. It restricts the flow of air and thus slows your breathing, heartbeat, and mind. It's a 'cooling' breath. ... The pattern is a long, slow inhale through pursed lips, and a long, deep exhale with a relaxed open mouth." Many people learn this breathing relaxation in Hatha Yoga, but many others learn it early on as "the Cigarette Breath." It is a perfect relaxation trick for smokers stuck in a non-smoking environment. Purse your lips, Mr. President and "Just pretend you're smoking a cigarette. It helps."