A New Nation for Progressives 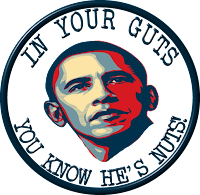 La Raza, NAACP, AFL-CIO, SEIU and the United States Student Association are weary of life in the Obama Nation. They have decided to break away and form their own new country, "One Nation." This is no joke. I read it in that Liberal Manifesto, the Washington Post.

"One Nation" is the land of their longing, the land of their dreams. Union Members, Government Employees and Illegal Aliens will be united into one loving brotherhood, sisterhood of the like-minded. No nasty Tea Partiers (known as Teabaggers in "One Nation"), No warriors from the U.S. military, No Christians, No Southerners, definitely No Arizona, nor anyone who believes in that anti-Human Rights document, the U.S. Constitution. God will be banished from their "One Nation - NOT Under God." America's Founding Fathers will find no place of honor in the history books of "One Nation."

"One Nation" will be the place of refuge for Obama Nation refugees. Their new Declaration of Freedom from Dissent has already been written: "Give us your tired, poor, huddled masses yearning to breathe free, The wretched refuse of your teeming shore. Send these to us: the hopeless, tempest-tossed liberals, intellectuals, university professors, mainstream media, coastal elites, crypto socialists, undocumented workers, environmental wackos and any other potential target of derision by mean-spirited Right Wingers, Rush Limbaugh and the State of Arizona.”
Posted by Edna Barney at 9:00 PM