Barry and the Pirates 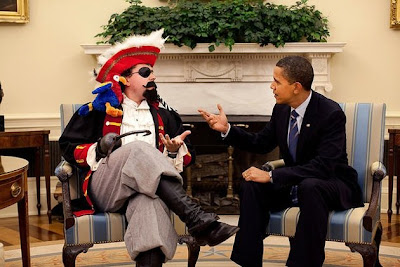 On September 19th, while the entire Middle East was in flames, President Barack Obama of the USA tweeted this photograph to the world. Yes, President Barack Obama was in the Peoples' House, the White House, talking like a Pirate on "Talk Like a Pirate Day." What is stunning is that Americans elected this man as their leader & are telling pollsters they plan to give him another four years. Pray for Regime Change in the USA!

Since the end of World War Two, our President, Democrat or Republican, has attended the annual D-Day Memorial service ... with only three exceptions: 2009, 2010, and 2011.

Obama Celebrates Talk Like a Pirate while the Middle East Burns
Posted by Edna Barney at 6:22 AM