ALL Participants In The Benghazi Cover-Up Should Be Punished including Barack Obama, his entire Administration at the time, and all the staff of: CNN, ABC, CBS, NBC, MSNBC, The New York Times, The Washington Post and all major newspapers that refused to report or question the Benghazi cover up. 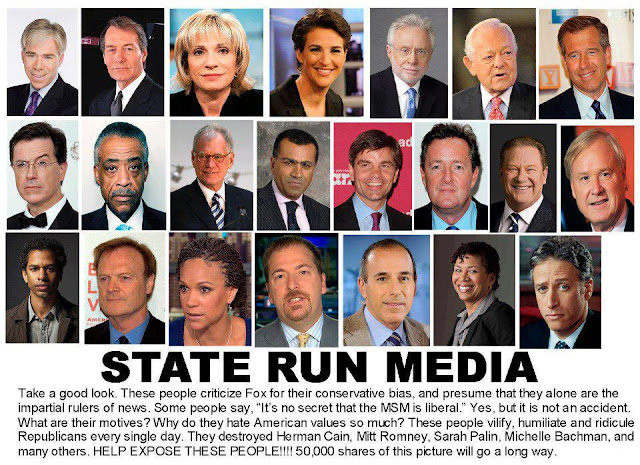 Benghazi mattered because it was "a question of character." That is correct. On a question of foreign policy or counterterrorism strategy, men of good faith can make the wrong decisions. But a failure of character corrodes the integrity of the state. In the face of overwhelming evidence and testimony to the contraray, the so-called journalists pictured above chose to treat the Benghazi cover-up as a Republican political talking point, not as the massive failure of character at the highest level of government, which it was and continues to be. That is why these particular journalists and others such as Candy Crowley deserve the enmity and contempt of freedom-loving Americans.
Posted by Edna Barney at 1:53 PM No comments:

Secretary of State Hillary Rodham Clinton’s question was “What difference at this point does it make?” Those are words to remember forever, America, and not just about Benghazi.
Posted by Edna Barney at 10:22 AM No comments:

The First Amendment was the First Target of Obama's Benghazi narrative so that Nakoula Basseley Nakoula would become the First Person in American history to be jailed for violating the new Islamic anti-blasphemy laws. America now has a legal precedent in place. Thank you Barack Obama and Hillary Clinton for making it all possible.
Posted by Edna Barney at 10:03 AM No comments:

America's Ministry of Propaganda and Lies

PULEEZE Everyone! Drop the terms 'Liberal' and 'Mainstream Media' from your lexicon. Those you describe as 'Liberal' are no such thing as they are opposed to liberty unless it involves sex. They are Leftists! They believe in all the "isms" on the Left - Socialism, Marxism, Totalitarianism, Communism, Unionism. As for a "mainstream media" or MSM - it does not exist. There is the Mass Media which is a corrupt media, a state-run media, an Obama Media. The real name of America's Mass Media is the Ministry of Propaganda and Lies.
Posted by Edna Barney at 10:01 AM No comments:

Mamas - Don't Let Your Babies Grow Up to be Soldiers

They Sign Up to Fight, but instead are sacrificed.
“The hearts and minds of the enemy are more valuable to this government than my son’s blood. This is submission and the cost of that submission on August 6 was my only son.” -- A Grieving Mother of a Brave American Seal speaking at the National Press Club, Washington DC
On 6 August 2011, a Boeing CH-47 Chinook military helicopter was shot down while transporting a quick reaction force attempting to reinforce an engaged unit of Army Rangers in Wardak province, west of Kabul, Afghanistan. All 38 people on board were killed, including 25 American special operations personnel, five United States Army National Guard and Army Reserve crewmen, seven Afghan commandos, and one Afghan interpreter, and a U.S. military working dog. It is considered the worst loss of U.S Military life in the Afghanistan campaign.

"Eighty per-cent of the U.S. deaths in Afghanistan over the past twelve years have occurred during the four years of the Obama administration. 15,000 US soldiers have come home injured or maimed during that same 4-year period" (compared to 2700 during the previous 8 years). -- Karen Vaughn

Read The Conservative Mom about the Press Conference today at the National Press Club, Washington DC and the treachery from American leaders that has cost so many of our young soldiers to lose their lives. President Obama and Vice President Biden, disclosed highly secret information on May 4, 2011, about the Navy Seal Team 6 that carried out the successful raid on Bin Laden’s compound resulting in his death. This disclosure put a retaliatory target on the backs of the fallen heroes, and they were shot down a few months later.

Posted by Edna Barney at 3:31 PM No comments: