The fathers and grandfathers of Confederate soldiers had fought and died in both the American Revolution and the War of 1812, helping to preserve the United States of America. Since the end of the Civil War and the defeat of the Confederacy, descendants of Confederate soldiers have supported and volunteered to fight in all the wars of the United States since that time, many with great distinction and many more paid the ultimate price for their sacrifice to their country.

Posted by Edna Barney at 8:19 PM No comments: 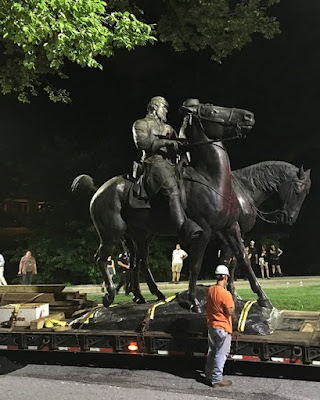 In the dead of an August night this past summer, Baltimore officials unceremoniously removed from Wyman Park, near Johns Hopkins University, a magnificent equestrian statue of Thomas Jonathan "Stonewall" Jackson, and Robert E. Lee. The monument was a gift from a local citizen and its 1948 installation had been delayed for twenty years due to the Great Depression and World War II. Maryland was a border state during the Civil War; Maryland was a slave state that did not secede from the Union.


However ... there is an untold story here. That story is when the statue was ripped from its mountings, two magnificent war horses, Traveller and Little Sorrel, were also dumped as dishonored rubbish. Equestrian statues standing in American parks were meant to honor all war horses that served faithfully--and suffered mightily--during the American Civil War. Indeed, civilized people should remember these noble animals, especially as ignorant voices of today clamor to destroy them because they carry a warrior rider of the losing side. Once destroyed, these war horse monuments will be forever banished from our view, as never again will Americans ever erect equestrian statues.

A Stealth History Lesson in Baltimore

"I have a dream that my four little children will one day live in a nation where they will not be judged by the color of their skin but by the content of their character." - Martin Luther King, Jr., 28 August 1963, at the Lincoln Memorial, Washington D.C.

Fast forward from 1963, to over half a century later, when we read the Wikipedia biography of a multi-ethnic, multi-racial, female United States Senator from California, Kamala Harris:

On November 8, 2016, she defeated Loretta Sanchez in the 2016 U.S. Senate election ... becoming the first Indian American, and one of the first biracial women (alongside Tammy Duckworth and Catherine Cortez Masto) elected to serve in the United States Senate."

A multitude of "biracial" persons have been born on American soil since the 1615 birth of Thomas Rolfe, son of American Indian Princess Pocahontas and her English husband John Rolfe. The "biracial" Thomas Rolfe became an officer of the Colony of Virginia in the early 1600s, causing one to ponder, over 400 years later, why being born "biracial" is heralded and celebrated amongst elected candidates to public office in a Democratic Republic in the year 2017. We still await the Dream of Martin Luther King Jr. to come to fruition in America where someday, sometime, people will be judged by the "content of their character" rather than the color of their skin.
Posted by Edna Barney at 6:00 PM No comments:

Donald Trump uses a template for his speeches. We label the speech:

This is unbelievable insight into the man Donald Trump by a comedian John Oliver. Did you know that $3 Billion of Trump's net worth comes from his name "Trump?" That is the valuation that Trump has put upon his trademark name. When he says he is "self-funding" his campaign, what he means is that he is making a loan to his campaign, which he expects to collect later.

Posted by Edna Barney at 9:28 AM No comments: 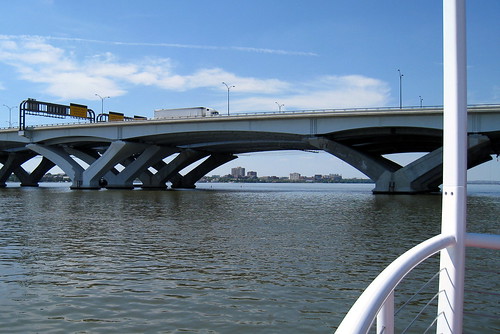 Here the protestors can spread themselves from the Maryland Shore, crossing a bit of Washington DC, to the bustling metropolis of Virginia's northern counties. Their disruptive presence will be duly noticed by the 250,000 daily crossing motorists for however many days they can endure the elements of life above the Potomac River.

The Wilson Bridge is the only bridge in the United States crossing the borders of three jurisdictions, i.e. Maryland, Washington DC,  and Virginia.

Posted by Edna Barney at 8:18 AM No comments: